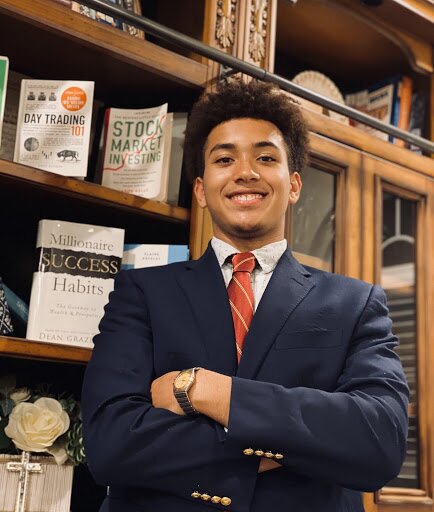 (This is the sixteen year old Day Trader Charles Engler)

Most teens these days find it difficult to find jobs. Even those who are able to find entry-level jobs at fast-food joints or grocery stores have to work for long hours after school or over weekends. But that was not the case for this young man.

Charles Engler Started with Stock Trading at the age of 14!

Charles started his trading journey back in 2018. At the age of 14 when he discovered a strong passion for finance and the Stock Market from his father.

Although his father wasn’t a big time Trader he still held his fair share of knowledge and experience. During 2018 the cannabis sector was hot and most of the stocks were just going up and up. That is when Charles’s father was reintroduced to stocks and began his investing. Out of curiosity Charles asked his father to teach him the fundamentals of stock trading and the concept of buying and selling stocks through online trading platforms.

Yet there was a lot to learn and the young Charles had spent months understanding what stocks to look for, when to buy, and when to sell. So far, he has traded over $295,000 since he first started!

An important factor he learned was, “Although you can make a lot of money with stock trading, it’s equally true that your losses can be substantial too.” In fact, he says that “It is impossible to become a successful trader without acknowledging the fact that there will be losses from time to time.”

Why Did Charles Choose to Invest in the Stock Market?

Even though he knew about the risks involved, Charles was fascinated by the amount of money he could earn by making the right investment in the stock market.

He understood that success and failure only rely on his abilities as an investor. And, he had the courage and skills to take that risk.

He first invested in a cannabis stock called Cronos cannabis ($CRON) at fourteen years old and sold the stock at a profit of 30 dollars. Charles says, “It was a great feeling; It’s something I will never forget.”

That was just the beginning…

His ambition to become a successful investor led him to read many books on finance and investing. He stayed up for nights to learn about bounce plays, RSI indicators, VWAPs, the MACD, stop losses, and other crucial elements of stock trading.

What does it mean to be a Day Trader?

Being a daytrader generally means holding a person is holding stock for a very short amount of time. This type of trading can be very volatile as wins and losses occur at a moment’s notice. Yet Charles would do whatever it took to become a successful Trader.

Charles finally made his dreams come true. Fast forward a year later and his hard work started paying off. He can now buy a stock and sell it at a $5,000 profit within the next 5 minutes. He is one of the youngest teens to accumulate five figures in the state of Maryland in such a short amount of time. So far, he has traded over $295,000 since he first started!

We asked what was the most you could’ve ever made? He replied saying, “Well it was last november I will never forget this moment.” “I had been eyeing this stock for a while now and I was going to get in with 10,000 shares and get out when it went up a dollar. The stock actually went up $15 and I could’ve made $150,000 that one morning. But I didn’t pull the trigger because that day I had to take PSAT haha.” He goes on to tell us that,“I take school very seriously because one day I want to be the head of a large firm on Wall Street, and I need good grades for that.” He currently has a 4.12 Honors GPA.

While no stock trade comes with guaranteed success, Charles has grown immensely as a day trader. But was it an easy road for Charles? Not even close.

Some Major Challenges He Faced While Becoming a Daytrader

When we asked him about the challenges he faced, Charles said, “I wish I would’ve known about the amount of work it takes to become a daytrader.” “I thought it was so simple to become a daytrader; all you need to do is to press a button and, boom you just made some money.” But obviously, that’s not the case at all.

Stock trading requires that you study the market, come up with a plan, analyze the stock, and then make the right call buying or selling the stock. The risk is high, one bad decision and you can make you lose thousands of dollars or even your whole account.

When we asked Charles what were two of the major challenges that he faced while becoming a day trader he said, “When I first started I was very impatient and undisciplined.”

He also shared that when he was very new to trading he would often think about how other professional traders were making thousands of dollars while he was just sitting out. This would lead to him forcing a trade and end up losing money because he would let his emotions control his decisions. That’s the worst thing a trader can ever do.

Another challenge he mentioned was having a lack of planning. When he began day trading he usually would trade without a plan. His method was that he would buy a stock when they were priced low and sell them whenever he saw his account was in the green. But doing that he quickly realised that would cost him hundreds and thousands of dollars, because he never planned when to set a stop loss or what to do when he was in the red. To him It was always just “sell when you have green.” He called them “beginner mistakes” as he claims that “ I know so much better than that now.”

He told us ,“If you’re a new investor really want to make good money investing in the stock market then you need to trade with a plan.” When you have a plan in place, you know:

All of these are crucial to becoming a successful trader.

Last but not the least, time management is extremely important. To become the best trader you can be, you may have to sacrifice your personal fun time here and there in order to be knowledgeable in the market and on your plays. You need to be prepared!

Charles says, “Every dollar earned is a dollar fought for.” He has learned to appreciate the value of money greatly over these two years. He understands that not every trade can be successful and losses are inevitable.

For all those who want to become a successful trader, he recommends that you should focus on:

And most importantly, don’t give up despite how bad things get.

Another goal that Charles aspires to accomplish is to inspire younger teens and adults to realize that they can accomplish any dream if they really work on it. He tells us, “I want to show people that age should not define your success and everyone should reach for their dreams.”

Q:We asked Charles how much did he grow his account in the first year he started?

A: “Well my first year trading It was filled with beginner mistakes. What can I say I was only fourteen and still learning. It was really the year of 2019 after I turned 15 when I grew my account from $200-$12,400.”

Q: What are your goals for this year?

A: “This year I look forward to getting my account into the six-figures and hopefully being able to pay for my college.” “I also hope to travel to different schools and share with the students my journey and inspire them to get into the world of finance.”

Q: What does your family think of you trading?

A: “My parents and my sister are really supportive, I give them a lot of credit in helping me stay on track and focused.” “The private school I was going to was pretty expensive so I thought I would ease some of the load off my parents by paying half of the tuition which was about $6,000. That was my early Christmas gift.”

A: “Definitely God and my parents. It took a lot of prayers and fortitude to get to the point where I’m at currently.”

You can reach him on twitter at @TheCharlesCash or email (cengler04@gmail.com)

Set Yourself Up To Get What You Want, Everytime