Have you ever worked with someone who was quick to take credit for every successful outcome they had a connection to, but who, at the first sign of trouble, would just as quickly assign blame to any and everyone involved – besides themselves? Or worse, have you ever realized after the fact that you have been guilty of doing this? Some leaders never see a good idea that isn’t theirs, or experience a mistake that isn’t someone else’s fault. Most workers, at some point in their career, will have an idea stolen by a boss.

Very few things will destroy employee morale and stifle future innovation more than having a supervisor take credit for somebody else’s idea. Effective leaders understand that they never lose credit when they share the glory with their staff. When leaders highlight the contributions of others, they increase their employees’ self-confidence and raise their spirits — which ultimately improves future performance
“When your team doesn’t trust you, you don’t get their best effort”

So, how do you go from being a good leader to a great leader?

1) Give credit to those responsible for positive outcomes

For many, this is an easy step. Make sure those around you know that you recognize their contributions, and understand how they relate to the success of the program, project, or task at hand. Taking 5 seconds to tell someone “good job” can pay huge dividends in terms of loyalty and buy in, not to mention that you probably will make their day. Also, be certain to publicly give them credit, even in situations where they are not present. If you are in a meeting and receive positive feedback for something, but feel a person or team deserves a significant portion of the credit for the success, say so. This will bolster the reputation of the team/team member in the eyes of others within the organization, and has the added benefit of serving as a reminder that you are the successful leader of a group of high-performing people.

This one can be a bit more difficult, but is just as crucial.
Nothing is more destructive to a team than a lack of trust. One of the many ways a trust deficit can be created or made worse is through externally assigning blame for failure, especially in public situations. If a leader does this to a member of their team, what reason does the team have to trust their leader in the future? This does not mean that you shouldn’t hold others accountable for poor performance. It does mean, however, that you need to make one thing perfectly clear: the buck stops with you. Your team falling short of a goal, missing a deadline, or performing sub-par work all share one common trait – it was your team that failed. Look in the mirror to identify how you could have been a better leader: review your instructions, communication style, follow up processes, etc. Does your team bear a level of responsibility for failing to meet an objective?

Absolutely. However, as their leader, you bear a greater responsibility to ensure that such situations are avoided.

Take ownership of these instances and work with individuals to identify and remedy specific areas of opportunity. If the entire team fell short, address this in a straight-forward manner during your next team meeting. If an individual is primarily responsible for a failure, have a direct conversation with them during their next one-on-one meeting. People need to know if they have failed to meet expectations, but they also need to know that they can trust you to be fair, to communicate openly and to have their interests in mind. Leadership may not be as complicated as we make it.

The late Bear Bryant, the great football coach, said: ‘I’m just a plow-hand from Arkansas, but I have learned how to hold a team together. How to lift some men up, how to calm down the others, until finally they’ve got one heartbeat together, a team. 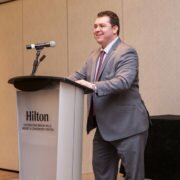 Cline is a business entrepreneur, consultant and marketing professional in the Chicago Land area. With a sports background playing minor level professional hockey, Cline found a new passion in the Brand Marketing & Sales field. Jacob has a naturally competitive spirit, which allowed him to pick up skills from an early age and throughout his hockey career that would set him up for success in becoming a young entrepreneur. His diverse skill set made him an effective leader and business owner, which led to subsequent success in representing fortune 100 & 500 companies throughout the country.

Why do bad things happen to good people?